The Bernie meme was an interesting phenomenon. My favorite one was very telling. It was Bernie as a tribble, as in Star Trek's TOS episode Trouble with Tribbles. 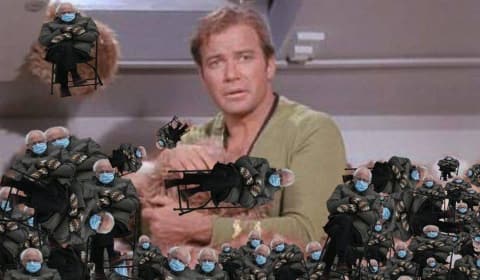 I watched it again last night to catch-up my memory on the story line.
Tribbles seem like cute and cuddly animals that make a pleasant purring sound. However, they have a secret. Let them have a little food, and they multiply ten fold.
In the episode, the Enterprise with Capt. Kirk was to guard grain at a space station from Klingons since it was to be used to feed a Federation outpost near the Klingon border.
Unfortunately for the station and Kirk, the grain compartment had air vents that allowed the small tribbles to get into the grain compartment.
The Bernie-as-Tribbles meme shows that Bernie and the (Democratic) Socialists (DSA) will sneak into a hole and eat resources from within. They have taken-up camp in the Democratic Party (DNC) and have taken over its resources. They could take over our country and eat our resources like they did in Venezuela. Then very little to nothing will be left for the rest of us. The DSA members will eat the grain that capitalism provided and give the rest of the country the scraps, like it always ends up happening. Socialism will then leave the country in ruins after capitalism is eaten through.
Posted by Gutterball Master